Yellow Lemon Software released a major update to FolderGlance, its file andĘfolder-navigation tool for Mac OS X, today. VersionĘ3.0 introduces access toĘfiles and folders from the menu bar, as well as support for customĘcontext-sensitive scripts in the Finder's context menu.

Yellow Lemon Software brings FolderGlance to version 3.0 today, with two major new features: A menu extra for easy access to files and folders from your menubar, and context-sensitive script support. FolderGlance is a utility that enables users to browse files and dig into folders directly from the Finder's context menu. With Hover Previews, files can be previewed instantly from the Finder's context menu simply by hovering the cursor over the file of interest. Files can be opened, moved, copied or opened with a custom application using a custom Open With menu. The custom Open With menu lets users tailor the applications that appear when attempting to open a file with a different application than the default. Package and bundle contents can be easily viewed from the context menu, and using Custom Folders, users have access to their frequently used files and folders whenever they open the Finder's context menu.

FolderGlance 3.0 extends previous versions with the addition of a menu extra. The menu extra appears in the user's menu bar, and is always available. Using the menu extra, users can browse their Custom Folders and volumes, as well as quickly search for items using Spotlight and browse the results in the FolderGlance way: Easily and effortlessly through a hierarchical set of menus.

FolderGlance 3.0 ships with two simple scripts that calculate the disk usage of the current selection, and a script to open a new Terminal instance in the folder a user has browsed to. Scripts are available both in the Finder's context menu, and in the menu extra. 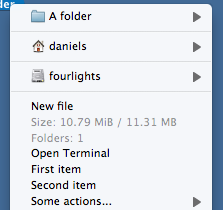 FolderGlance has received much praise from the Mac community since its release. In a review for Macworld's Mac Gems section, Dan Frakes writes: "It's a more-focused alternative to FinderPop that some people may find easier to use," giving it 4 out of 5 mice. The Unofficial Apple Weblog (TUAW) declared FolderGlance to be one of their "Friday Favorites," and Mac360 calls it "...a Mac power user's file and folder dream utility." Users agree, handing out high ratings, with comments like "FolderGlance is so valuable and works so flawlessly, that every time I use it (which is all the time!) I wonder why the Mac Operating System doesn't come with it already built in..." and "brilliant!"

A screenshot of FolderGlance being used to preview an image from the Finder's context menu is shown below. A full-size version of the screenshot is available here: http://www.scsc.no/pr/FolderGlance-3.0-screenshot.png

Yellow Lemon Software is run by Norwegian Mac-developer Daniel Stødle. Daniel has developed and published software for the Macintosh since 1996. In addition to FolderGlance, he is the developer of Screen Sieve, a utility that enables users to search the contents of their currently active window and the open source Universal Back Button. He was also the developer of now-retired Desktop Transporter, a remote desktop application for Mac OS X.